In the game of fitness wearables, it’s hard to give everyone what they want. That’s why Garmin offers a seemingly endless array of watches, Apple currently sells no less than three Apple Watches, and Fitbit has an array of wearables from kid-centric trackers to a smartwatch the company hopes can one day detect early symptoms of COVID-19.

The Fitbit Luxe, which retails for $150, is the latter’s latest style-focused fitness tracker. It attempts to provide some smartwatch luxuries in a device that looks like a piece of jewelry. The Luxe is a cute tracker, but it has some questionable choices and oversights to be aware of—most of which are endemic to Fitbit devices.

If you’re looking for an ultracasual fitness tracker and a stylish smart device for your wrist, the Fitbit Luxe could be one of your best options. If you’re looking to get active and stay active, though, you may want to look elsewhere. 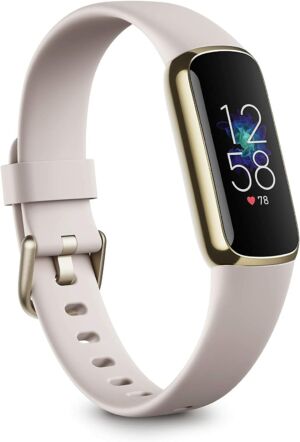 (Ars Technica may earn compensation for sales from links on this post through affiliate programs.)

Looks are the main appeal of the Fitbit Luxe, and the special edition is particularly striking. It passes decently as a piece of jewelry, thanks to its golden body attached to a stainless-steel, golden-colored “Parker Link Bracelet” made by California-based jewelry brand Gorjana. When working out, you’ll want to swap it out for the included silicone band, though, as Fitbit notes the Gorjana bracelet may discolor after prolonged contact with sweat.

This special edition fetches an extra $50 on top of the Luxe’s base price, or you can buy the link bracelet separately for $100. There are also leather and stainless-steel bands, among others, to choose from.

If style is important to you with this kind of device, you may consider these relatively costly accessories. Otherwise, the $150 base price—a $50 increase over the less opulently equipped but similarly functional Fitbit Inspire 2—may be the sweet spot between style and cost. Not everyone wants an activity tracker that looks like a LIVESTRONG bracelet with a screen.

The Luxe’s vivid, colorful OLED touchscreen is the other major aesthetic difference from the Inspire 2. Compared to the black-and-white OLED of the Inspire, the Luxe screen adds depth and vibrancy with its inky blacks and pops of color when the screen’s on. This contributes to the Luxe’s higher-end look and feel. It is a tiny screen, measuring at less than an inch, but thankfully it doesn’t feel too cramped for reading quick bits of information.

Where things get a trifle annoying is the Luxe’s user interface. Fitbit’s never been home to the most intuitive wearable UIs, but in melding the simplistic carousel-based UI of typical fitness trackers with more common smartwatch functionalities, Fitbit has done a decent job of keeping things usable. There are some shortcomings, though.

The first thing you’ll notice is the Luxe’s slow reaction to inputs. It’s a full step behind whatever swiping or tapping gesture you’ve made. Whether that’s by design—perhaps to cope with the fact that your finger covers the entire screen as you interact with it—or not, it ultimately feels laggy and cheap. The sluggishness may cause you to double up on inputs, even after you’ve grown accustomed to the delay.

Smaller quirks, like the double-tap gesture required to return to the home screen, take some getting used to. In that case, you have to target the top of the screen in order to avoid errant inputs, but this works well once you’ve got the hang of it.

The most frustrating oversights deal with exercise functionality. Initiating the swimming activity on the Luxe automatically locks the screen from further inputs until a combination of taps is achieved, but there is no locking option for any other activity. As a boxer, however, this is a function I would rely on heavily.

In fact, this oversight renders the Luxe totally useless for kickboxing, an activity that’s preloaded on the tracker by default. Unless you’re shadow kickboxing—i.e., not using a bag and gloves—then this activity mode will constantly trigger inputs within your gloves as it did for me. Nine out of 10 boxing sessions, the Luxe would screw up my tracking by pausing or canceling the activity altogether.

There’s no ability to control your music from the Luxe, either, and there’s no way to put an activity-tracking session in the background while doing something else. If you’re midsession and want to check a text or set a timer, you’ll have to end the activity entirely to use any other part of the Luxe’s user interface.

As far as notification handling goes, the Luxe is usable. Since the screen is so small, it’ll require a tap and a scroll or two to read even short messages, but it gets the job done with little fuss. Inanely, though, you must enable notifications for each app, one by one, within the Fitbit app settings. And you can only add an app to the notification whitelist after you’ve set up the Luxe and received at least one notification from the app of interest.

This means that, if you haven’t received a notification from an app since setting up your Luxe, receiving its alerts on your Luxe isn’t even an option. Consequently, you must periodically go into the Fitbit app and check to see which notifications you can whitelist as more apps eventually send you an alert. It’s totally bonkers and borderline punitive.

Still, the Luxe is technically an activity tracker, not a full-featured smartwatch. So, if you like Fitbit’s approach to fitness but want features like music control and a roomier and somewhat smoother UI, perhaps a Fitbit Sense or Versa would be more your speed. Although, these will also force you to suffer the wanton notification setup process, among other issues mentioned above.